"The best tip, the one above all is to go up in the mountains and ski."

Probably I skipped something but these are the ones that I remembered and that I use most of the time. With more time spent up in the mountains, you get more experience... So with time, you'll find your own tricks to help with the ascent. The best tip, the one above all is to go up in the mountains and ski.

If you climb a steep line, quite often an ax and crampons come in handy. Not only it will make it safer for you to get up there but it'll also save you a ton of energy. Ice axes are not only for ice and snow. They work amazingly well in grass patches and on rocks as well. Dry-tooling technique.

Your boots will be really important especially the type of sole in them. Vibram sole is a game-changer. Walking up with them is a completely different story than with a casual alpine boot sole -which is made from plastic and is extremely slippery.

Tune them up for your boot size and it will open up so many new possibilities. Make sure that you learn how to use them correctly before the first tour. How to put them on and most importantly, how to walk with them. Up, down and sideways. So if the snow is hard or there's ice, just put on the crampons and proceed to ascend. 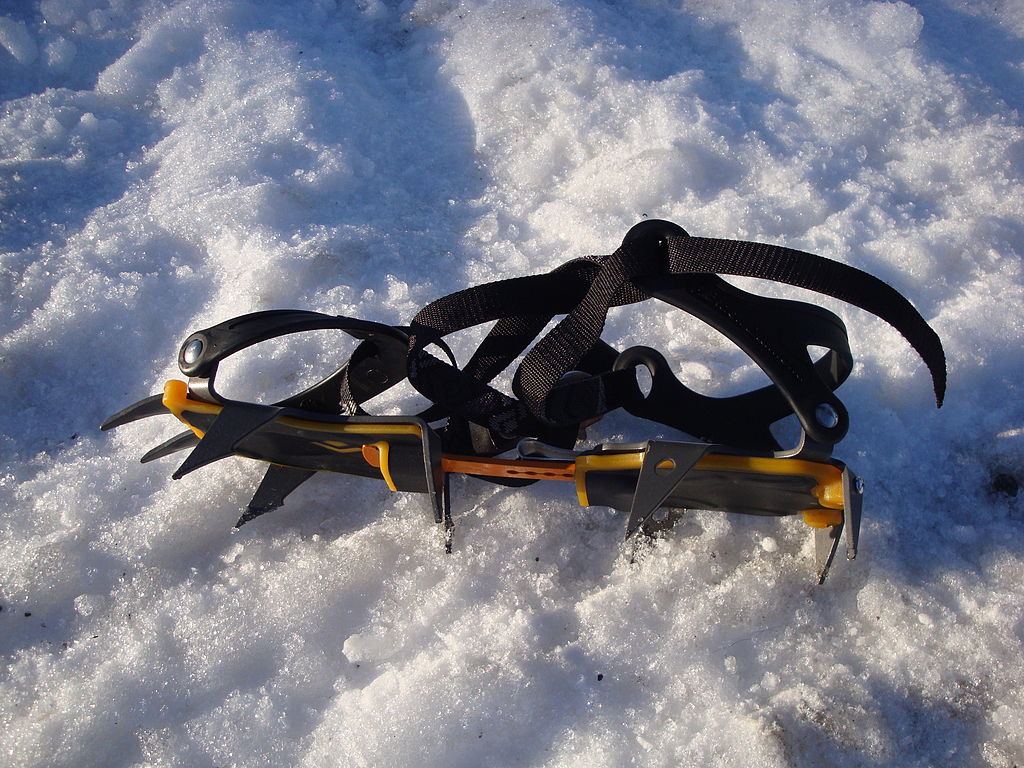 Sometimes the only way up is to grab for a rock or dig your hands into the snow. If the rocks are warm it's better to just take off the gloves and grab the rock. The grip is way better and more secure. The second option is a fight for existence. Snow is often soft and it doesn't hold the weight of the skier. In this case, arms serve as an anchor to hold you on the spot while you move your legs higher.

The basics of climbing. When you're ascending, especially on steep and tricky terrain make sure you always have 3 points of contact. Example: both hands on the snow or holding for the ice axes, one foot steadily fixed in snow and the other one is moving upwards. By far the best training for this is climbing.

When you're in doubt always use the rope. 30 m is usually enough. Make a solid anchor and secure yourself in it. Then just make the rappel over the tricky section and continue skiing. Remember, always play it safe.

As I mentioned in the previous article, if there is deep snow on the ascent, use your skis or ski for anchoring in and dragging yourself up. It saves you a ton of energy and your ascent will be much faster.

Always plan your ascend. Look for the weak spots, avalanche paths, etc. and avoid it. Look for places where you can hide in case anything would go down (avalanche, rocks..). If there are only exposed spots (rocks, ice, really steep sections) check how and where you'll climb over. And later where you will go down.

If you ever need to be under cornice try to be as quick as possible. But always try to avoid them. Hike and tour in protected areas. Be aware of your surroundings.

10. Exchange of the leader

When walking up, either on skis or by foot, shift the leader of the group frequently. On 5, 10 min. It depends on the inclination of terrain and depth of snow. This way the whole group will advance much faster. The leader can go "all in" for those few minutes when he/she is in front. After that, he goes at the end of the line where he can rest until the next round. Keep a safe distance between each other. Again this distance depends on the terrain, high avalanche risk, and steepness.